Every GM needs the ability to generate a random Squid encounter in most roleplaying games. This set of handy charts pre-supposes that the squid in question is capable of flight through the air, and of surviving out of water. Other than that, all details are determined from the following tables. Unless otherwise directed, determine a random character to be the focus of the encounter, and then roll once on each table, and let the good times happen.

Type of Squid?
Where is the Squid?
Squid Special Abilities
Squidquest

Runequest - it should be much cooler than it seems

Runequest and the world that grew up along with it (and boardgames such as Dragon Pass and Red Moon/White Bear), known as Glorantha, is home to some amazing mythology and wonderful fantasy creatures.

And while I really liked good old 2nd edition Runequest (from Chaosium), it always seemed to be much more popular in England than the USA. Then when Avalon Hill published their version, they sort of emasculated Glorantha, and also mucked with a simple magic system (battle magic and rune magic) by adding sorcery. For some reason they also renamed Battle Magic to Spirit Magic. Not sure why. The addition of sorcery, of course, wasn't just a rule change, it also changed the fabric of the runequest world. The older system (where the world, Glorantha, was an integral part of the rules) had a real reason for there to be the two main types of magic - battle magic was something that everyone could learn. Small, quick spells that you cast, and they would dwindle quickly. The more potent rune magic spells were part of the mythology of the world (love it, or hate it), and so had a reason to be in the game.

Then along comes sorcery - a new, and potent magic, that doesn't really fit in the game. BUT it did give a new type of scholarly type magic that fit most medieval European style RPG worlds. And Avalon Hill was targeting (at least in the basic release) a sort of mythic Europe setting for their version of the game. Eventually, due to fan demand, and the ability to sense a buck to be made, Avalon Hill produced much of the Glorantha material (and a lot of it was in a very good format). But the game was changed forever.

The faithful have since released Glorantha in a couple of (admittedly) very weak looking systems for roleplaying heroquests and epic mythic adventures. Maybe it appeals to some, but not to me and my group. Good news however, there does seem to be an adherence to things old with the Mongoose Publishing version.

EDIT - The Mongoose version seems to be a pseudo d20 version. Sad. However, in June of 2008, Chaosium released a version of Basic Role Playing. This is not the old 1980 version of BRP (which was a stripped down version of their d100 rules, sort of Runequest without the Runequest parts), but is actually a reprint of the four books that made up the Avalon Hill production, but with the name "Runequest" removed throughout, and with the name "Basic Role Play" inserted instead. So, if sorcery is to be included, and battle magic is spirit magic, then it seems like this is the best version currently in print.

There are those that doubt that Hilda Ironbottom has a softer side. After all, most of the time she is thought of as a stout fighter, companion to Annalise of Ehlonna, the Pope of Pain, Gilmore Badgerbreath (he's so cute, she thinks), and Dromeda of Underdark.

Previously, an image of the civilian side of Hilda was published, here. And certainly, if asked, Gilmore will attest to her feminine charms (but probably quicker after a couple of flagons of good Elf wine). But it is important to remember, that there is more to Hilda than just her business persona.

She might be a Duergar, and they have a history of having their women (and men) being bald (shorn of all hair, alright?), and certainly with a penchant for Evil, but she is really a good person. And she wears a right decent wig.

And the fact that she is a fighter/thief (3/3) makes her quite useful. She has exhbited exceptional rope use and climbing skills, and fights pretty good with the hand ax and the light crossbow.

Castles and Crusades Campaign - A Farewell to Arms

Viney Badeloch, the rogue extraordinaire, decalared a Farewell to Arms during the game this past week.

The adventurers had found the portal at the bottom of the Glacial Grotto of the Ice Hunter Goblins, and through it transported across the world to the very bottom of the dungeons of the ShadowRose, in Keoland.

Upon arriving, several guards of the goblin raider, Gutrag Hagrush, were dispatched, along with Gutrag himself. The group recovered the lost Kreftring, the heirloom of the Raker Mountain Dwarves of Ratik that the group had agreed to help.

Well, old Viney, due to some romantic entanglements that he got involved in when last in Keoland, decided that he actually liked the world much better back in Ratik, so he volunteered to return the Ring as quickly as possible (the adventurers have been underground, now, for several days). He took along with him the women the group rescued from the Goblins (serving as harem slaves).

Hopefully Viney will not be too late in returning the ring, and high priest Starmetal and the King will be fortified in their positions, and the wicked nephew of the king (and his advisor, from the Great Kingdom) will be recognized for what they are - opportunistic greedy materialists.

Is this the end of Viney Badeloch? Probably not, but for now it is a Farewell to Arms.

How big does a bug have to get to be considered a giant bug? I got to thinking about this one today in reflection on John's Haymaker article on Giant Centipede, and also about the "giant" bugs from RPGs and from great atomic age movies. 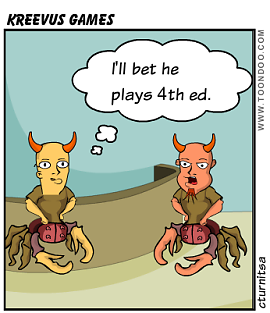 No comments:
Email ThisBlogThis!Share to TwitterShare to FacebookShare to Pinterest
Labels: roleplaying

Following the previous adventure, the group encounters a Drow monk - an outsider of typical Rakers Drow society - who agrees to join the group and stay with them. This is Leigh's new character, replacing his fallen dwarf, Nords.

Our Castles and Crusades session last night had a great finish to a tough adventure. The players received their adventure experience points, and progressed the campaign.

In addition to fighting another TOUGH group of greater goblins, the group explored an underground fungus garden, and discovered a group of women who were being kept as slaves by the goblins. Liberating both fungus and women, the group proceeded to delve into even deeper regions of the goblin outpost, to find the goal of their quest. The portal to the dungeon in Keoland (where, presumably, the Goblin Chieftain and the Kreftring are to be found) was discovered. After testing the portal, the entire group went through, and are now deep in the depths of the "Forgotten Dungeons of the Shadow Rose"

Future updates to be posted, but here is a list of all campaign updates so far.

Once the players are in Keoland, expect some more run-ins with Drow Elves, as the main plot of the campaign (and the secret of the League of Sorcerors) begins to reveal itself.

There are some really classic D&D style roleplay tropes. I am wondering which of these are still in play these days, considering some resistance to the "spike the doors of the dungeon room, so we can take an 8 hour rest" maneuver performed by my current Castles and Crusades group.