Before the three Goddesses were worshiped by the Westroners.  Before even the Westroners came into the valley, the northern peoples (all those north of the Great River) knew and worshiped Bronc, the Storm King.  He is an old deity, who was even known by the Old Ones, but the details of the relationship are not known these days.

The peoples who, since long ago, have remained true to the Storm King culture are divided up into tribes.  There are an unknown number of tribes across the northern frontier of the Destriel Mountains, however there is a concentration of various powerful tribes in and around the lands between the Great Owl Forest and the Shadow Woods.  This includes along the shores of the Greywater River, and also the Terrapin River.  The tribesmen are found throughout the region, however, due to the strong emphasis placed in the culture to go a-viking (raids for booty and adventure).

The tribes in the regions around the Greywater are in some ways rivals of the Westron Baronies, at least how they existed hundreds of years ago, when they were first formed.  There are a variety of the tribes in this area strong enough and numerous enough to have formed (small) cities.  These cities are walled wooden structures, usually with a deep moat around the outer wall.  Many of the Jarls who rule these cities are wealthy enough that they can field sizable fleets of dragon ships along the Greywater and Terrapin rivers. 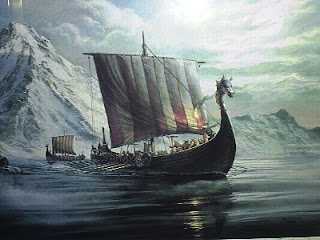 Because of the concentration of tribesmen that settle in and around these cities, there is actually a reasonably well defined economy, with all variety of specialty craftsmen.  Because of this, the military technology available to not only the huscarls and fyrdmen, but also to freebooters and adventurers nearly rivals that of the Westron Baronies.  Storm King barbarians disdain, as a whole, armor heavier than chainmail, and also the use of the pike and of the crossbow.  Preferred weapons are the sling, javelin and bow for ranged combat, and the broadsword and battleaxe for hand-to-hand combat.

In addition to the cities of the more powerful tribes, there are numerous smaller villages dotting the region. Many of these are peopled primarily by a single tribe, to also include those that marry in (either by arrangement, or as the result of viking raids).  These tribes are also protected wooden affairs, with wooden buildings, and occasionally (when built along either a main river, or a navigable tributary) with slips for dragon ships, and other craft.  Many of these villages (almost all) are direct fiefdom holdings of the more powerful Jarls, and so owe fyrdmen - feudal warriors - to the Jarl whenever he has a need for them.  When they are NOT enfiefed to the Jarl the fyrdmen either take care of their own small land holdings (animals and crops) or are out on viking raids. 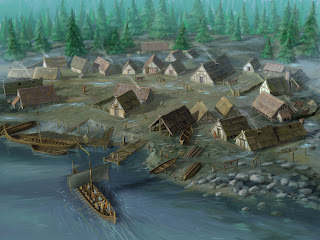 While animals are used for labor and muscle power (both in transport, and agriculture), there is not a strong horse riding culture among the Storm King barbarians.  Other animals are domesticated, and occasionally ridden, and these include giant rams, wooly rhinos, bison, great bears, and even (occasionally) giant snowy owls from the Great Owl Forest.
No comments:
Email ThisBlogThis!Share to TwitterShare to FacebookShare to Pinterest
Labels: Goddesses, Great Owl Forest, Greywater River, River Jarls, Shadow Woods, storm king, Terrapin River, Westroners

These dangerous parasites live in the Cliffs of Cloud caves near the home of the Sky Snails.  They were first mentioned in the write up on Amberstone mining.

Num Appearing: 2d6 in a nest, rarely encountered alone
Alignment: neutral
Movement: 10' (when crawling), see below for jet propulsion
Armor Class: 5
Hit Dice: 2
Attacks: 1
Damage: 1d4+1
Save: F2
Morale: 7
Special: The Blood Star, when full grown, looks like a large star fish, approximately 14 inches across, and it is blood red.  They dwell in caves and along cliffs and trees inhabited by other animals that they parasitically draw blood from (such as sky snails).

If they sense a living being within 30' they will attack, their attack amounting to a jet propulsion attack from their roost.  If they hit scores, they strike their victim on an exposed fleshy part, where they can do damage, and attempt to insert their blood tentacle (see below).  If they miss, then roll 1d6 - on a 1-3, they have struck the victim somewhere (armor, clothes, thich hair) where they cannot reach susceptible skin.  On a 4-6, they have landed on the ground in a random direction, some 1d6 feet from the feet of the intended victim.

Once an attack scores damage, there is a chance that the blood star will attach a tentacle into it's victim (save vs. petrification to avoid).  If that occurs, it will draw blood each turn (1d6 points of damage).  On any turn when the blood star scores 6 points of damage, it has drawn enough energy from its victim to launch a brood of young blood stars.  These cannot move, but will use jet propulsion to attack victims within 30'.  There will be 1d6 young, from each launching (it happens every time a blood star rolls a '6' for blood damage).  The young only have 1hd, and only do 1d2 damage from their initial attack, but once they start drawing blood, they quickly grow to life size, and have the nodules on their back to begin launching their own broods as soon as they roll a '6' for blood damage. 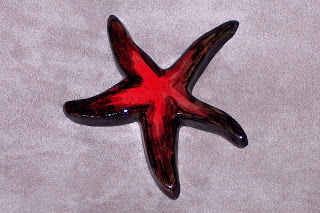 No comments:
Email ThisBlogThis!Share to TwitterShare to FacebookShare to Pinterest
Labels: Amberstone, Cliffs of Cloud

Sky snails are key to the mining operation of Amberstone described here.  In addition to the role they play in transporting the large multi-ton blocks of Amberstone out of the mountains, and down to the city of Khomaes, and beyond, the snails are fascinating creature in their own right.

Num Appearing: either 2 (mated pair), or 2d12 (colony)
Alignment: neutral good
Movement: 30' (unless enraged, then it becomes 120')/ fly 30'
Armor Class: 2
Hit Dice: 12 (fully grown)
Num Attacks: 1 (unless enraged, then 3) - this is always 1 acid shot (range 30', and when enraged will also get feeler flails
Damage: acid shot 2d6 (save v. poison or take an additional 1d6 for 1d4 rounds); feeler flails are 2d8
Save: F12 (matching hd)
Morale: 9
Special: Extra attacks (feeler flails) and extra speed only are available when the Sky Snail is enraged, conditions for being enraged described below.
Description: Sky snails are a peculiar breed of giant snail that dwell in and around the crevices and caves of the Cliffs of Cloud.  Their most peculiar visible features are (1) their size (they can get up to 10' across the shell, and perhaps another 4' of extended head, and 4' of extended tail), and (2) their amazing bright color.  It is an intense, and brilliant cobalt blue (in the shell) when fully grown, and a slightly lighter shade for the flesh of the body.  As newly hatched younglings, they are actually white, with shells of only the slightest tint of blue.

In addition to their size and appearance, however, there is another feature of the sky snails that is remarkable.  Their shells have a natural ability to not only levitate, but also to support a vast amount of weight.  These shells retain this ability once the snails are dead, for a period of time (1d6+6 months).  If it were not levitating, the empty shell of a fully grown sky snail would weigh nearly 1000 pounds, but have a weight of nothing because of the magical levitation characteristic.  A fully grown snail shell can also lift a further weight of 2 tons (4000 pounds).

The snails are fairly sedate and lethargic.  They will only attack, unless attacked, in two different circumstances (both of these "enrage" the snails, which raises their movement value to 120').  First, if the young (1hd, AC 6) of a mated pair of sky snails (they mate for life, sharing what wizards describe as a "mild telepathic bond") are threatened in any way, both parents will attack with a fury.  Second, whenever the metals Electrum or Platinum are brought within 100' of a snail, they will attack the source, and seek to voraciously consume the metal.  They do this with their corrosive, acidic body juices.

In addition to being able to move by their normal snail foot motion, the snails can release and from their surface, and fly.  They have an organ that allows them to direct their levitation, allowing them to fly at a 30' rate.  There is not a known limit to how high they can levitate above the surface.  It has been surmised that they could possible reach the moons.