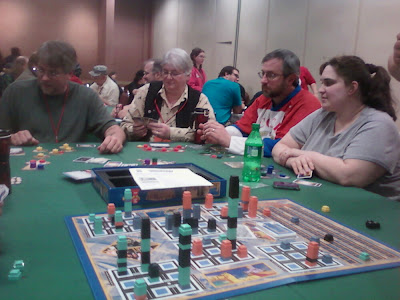 MarsCon 2010 has just run its course, and it was a good year. There were a couple of personnel snafu's but it all came together nicely. From my perspective, it was a really nice convention.

At the last minute, the senior leadership asked John Desmarais and yours truly to help with the organization of gaming. We did what we could, and organize a few important events (RPGA D&D, Pathfinder, Project:Crusader, Quickfire Starfighters, Delta Files, Visible Dungeon, and demo games from Privateer Press and Steve Jackson Games, among others). This meant dropping our own plans to run a number of roleplaying sessions (Champions, Pulp Hero, Castles & Crusades and Mutant Future - to name the candidates). This was going to be a Neptune City heavy year for us, but alas - it was not meant to be, mes amis.

Even with the lateness of the planning, the room was full almost throughout the weekend. Once, around 2am on Saturday night, the room was down to three games being played (horrors), but for the most part, Friday Evening, and all day and night Saturday the room was full. It was even quite heavily utilized on Sunday. A good year.

In order to contribute somewhat, even though there was little in the way of RPGs or Miniatures being offered by "Gaming with Chuck", there were a number of boardgames. These included:

All in all - a good convention. I am sure that I will help out (if allowed) with MarsCon 2011 in some way. But more importantly, I hope I can run a game or two!