Gorrem - City of the Ten Gates

The namesake, and chief, city at the heart of the Barony of Gorrem is also called the City of the Ten Gates. It has a population of 27,000. There are a number of towns that are reliant on it - these are the chief population centers of the Barony, along with each having its own supporting network of villages and farm country.
The Barony is located in the Wychwood (south central) region of the Valley, and its chief political neighbors are the Barony of Lynch (east, on the far side of the Tiazarr River); the Barony of Pellorix on the far side of the Ancelhenn Lake to the southwest; north across the Great River is the Barony of Na Kram.

Much of the Barony is forested, and in addition to the many human towns listed above, there are a large number of "forest folk" in the wooded areas of the demesne.  To the west (in the Redsmoke Woods) there are a large number of Hedgehog People.  To the east, in the Plum Woods and the Belley Woods, there are a number of Mouseling communities.  Also in the region between Belley and Plum is the Green Apple Commonwealth - a small Halfling county that owes fealty to the Barony of Gorrem.  In the forests in the northern reaches of the Barony, along the Great River, there are numerous forest settlements of Wolflings.

The Barony is not home to many Dwarves or Gnomes.  And the few Elven settlements that exist are deep within the forested regions of the demesne.

The current ruling family is the Household of Terrasund, with Baroness Catherine II on the throne.

The city is home to the Homehall Cathedral - maintained by a community of clerics and monastics of the order of St. Ermo.  The Tower Druaqua (Bardic College of Maelwyn) is there. Also within the walls of the city can be found Castle Tattelis - home of the Terrasund family.  Not really of political concern, but of possible interest to adventurers and explorers - the abandoned tower of Ordobrandt is also within the city, but it is guarded by city guard.

Within the walled fields surrounding the city, there is the keep and practice grounds of the Knights of the Malmen Rose.  The Knights are a chivalric (but not Paladin) order that has a loose alliance with Gorrem, but have a distinct arrangement where they do not have Feudal duty, but are rather allies.

The Ten Gates, as well as much of the city, are protected by the city watch, known as Gorrem Levy.  They are much more than a levy, however, as they are a regular full time soldiery.  Typical equipment includes ring mail, simple helmet, bardiche, and short sword.  The Gorrem Levy are (total) approximately 2000 strong, however only 800 are serving at any one time.  There are several towers both on the outer walls and located along the inner walls where these are housed.

In addition to the sites and locations already mentioned, the city is somewhat known for its Inns and Taverns, each of which boasts its own ales and beers.  There are competitive wars between the larger Taverns, each claiming to be the "Best in Gorrem" or "The Baroness' Favorite". 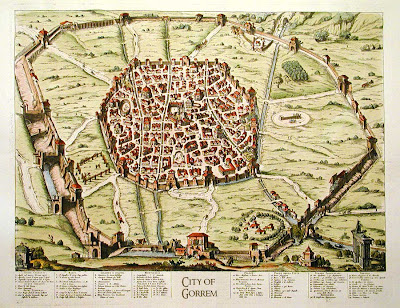