In and around the Aghanz hills there dwells a race of very, very primitive people.  They are very similar to what we, from our own Earth natural history, would term "neanderthals".  Incredibly bulky and thick, with heavy duty skeletal structure capable of supporting massive muscle structure, the Shagmen are a very strong and fierce people - which they need given the types of prey that they hunt for survival. 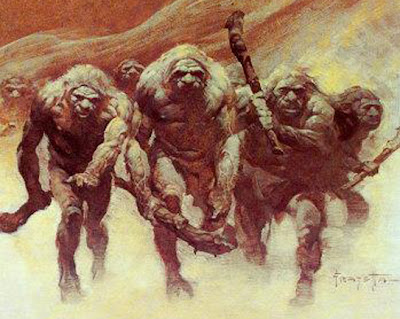 Each small family tribe of Shagmen is led by a Shamen, a cleric type figure of approximately 6th level (6HD), capable of casting either clerical or druidical spells, but one less per spell level than an equivalent cleric.

Sometimes larger groups will come together under a chief, who will be a 7th level fighter, he will have 1 subchief for every tribe group (approximately 10 shagmen, more or less).  A subchief is a 5th level fighter.

Shagmen are very adept at coordinating attacks, and will always use their numbers to surround a foe, and attack from multiple sides (enabling flank and rear attacks).

Shagmen have incredibly thick skins, and only take half damage from blunt weapons, including stones thrown by the women and children of the tribe, so while the warriors are engaged in combat with a foe, the women and children will stand back and continually pelt the combat area with thrown stones, not having any regard for striking their resistant male counterparts.

Shagmen fear no natural foe, but magical attcks, and spell use is very disconcerting to them, and they will lose two points from their morale value when facing a foe using magic that is visible (magic weapons, spell use, etc).