Khomaes is the name for both the City and the Barony of which it is a capital.  The city itself is built vertically, on a large rocky mound sticking up out of the earth, and then down deep into the rocky rift that surrounds the mound, on the southern and eastern side of the mound.  The mound is called Dancer's Spike, and the rift is known as Dancer's Fall. The names come from the Westroner ranger (Obar Dancer) that discovered the region, and brought back word for the Khomaes family to come and establish their family holding. 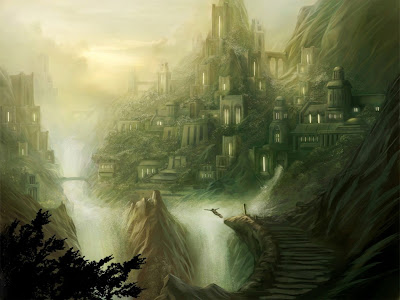 The main buildings of military, industry, and religious importance are all built either on the Spike, or down in the Rift.  The Spike is known as the high city, and the Rift is known as the low city.  Surrounding this immediate center of the city, are multiple rings of reinforced curtain walls, with defensive towers.  Outside the walls, stretching for miles in all directions, are acres and acres of farm land, spotted with small local villages.  Further out, there are five major Towns that are part of the Barony north of the King's Highway (Truend, Sagio Mill, Iffel, Acron Trade and Khoben Vale), and two additional (Cyclot, Nowak) south of the King's Highway, closer to the Harp Woods.  These fill the area, fairly regularly spread out (see map), of the Barony.  The Barony itself stretches north to the Aghanz hills, and down to the Great River  The Barony stretches from the Lost Mare River on the western edge, east to come down from the Aghanz, and split the Harp Woods.

One of the immediately noticed features of Khomaes are the swirling clouds of mist that fill its streets, and drift up the Spike to surround the Baronial castle, and the other important buildings of the high city.  The low city is almost always full of the densest clouds of mist.  These mists take on different colors, and in different parts of the cities, within a single day, will often change colors, slowly, over time.  There is a lot of speculation over their source, but it is (in truth) unknown.  They have been a part of the city since its founding, over 1200 years ago.  Magical means have been attempted to remove the mists from the city, and at best, work only temporarily.  Usually they have no effect whatsoever.

Other than the Baronial home (Castle Erthos), occupied for the past 120 years by successive members of the Iaggio family, there are numerous smaller estates and villas, the better of which are in the high city.  In addition, there are all manner of craftsmen and artisan to be found, most of which (other than various dilettante  pursuits by some of the jaded nobility) are located in home/workshop settings in the low city.  Coming out of a high point of Dancer's Spike, there is a great spring that fills a gorge, in the courtyard of Castle Erthos, and that flows down through the parts of the high city, as a river, in channels among the narrow and winding streets that go up and down the Spike.  Finally, it splits, near the lower layers of the high city, and forms several waterfalls that then drop down the rift into the low city.

In the high city, there is a very large round, stone platform, jutting out from Dancer's Spike several hundred yards, made of stone, but covered in a thick layer of soil.  On it is the most beautiful of parks, full of flowering fruit trees, and exotic and alien flowering plants of all types, small pools, fountains, and springs interspersed with lovely little open areas, surrounded by charming tended hedges and other border plants.  Between the hedges of the various little "parks" or open areas, there are lovely marble arches.  Within this large garden, known as the Garden of Charm, exists the school of enchantment and charm magic, the Glamor Hall for Bewitchment and Entrancement.  To one who needs to find the school, or who knows the key to the various charms hiding it, the school's entrance appears as a shadowy purple robe, hanging down in one of the marble archways.

Another famous feature that is in the high city are the twin cathedrals of Appuco Fast, and Ramee Tower.  Appuco Fast is dedicated to the branch of the church under the goddess Corrise, but especially St. Norena (patron saint of fire and comfort) and Ramee Tower is dedicated to the goddess Nadene, although it is maintained by members of St. Ellain's heirarchy (patron saint of Art and Water).  The twin cathedrals are attended by elaborate tunnels deep within the Spike, and are very different internally, but were built as patronage projects by one of the older barons, F'Tarr Oma, about 600 years ago.  The only difference, other than decoration for the different festivals from the two branches of the church, that is noticeable outside are the contents of the very large fountain and well in front of each cathedral.  Appuco Fast has a great fountain of fire, bubbling out rather than jetting out, so that it appears to be the essence of the fire, and not what it is burning that is generating it. Around it, in the stone pool, is what appears to be a vast quantity of fire, just being held within the pool.  In contrast to this, of course, is Ramee Tower, which features a pool and fountain of clearest water, constantly bubbling out, but always (seemingly of its own accord - who knows?) changing patterns of spray and frequency of change to that spray.