Shadow Creatures - encounter from the Cult of the White Shadow

A creature that appears in the Cult of the White Shadow adventure is the Shadow Creature.  These are semi-ethereal (they have a solid, at least from the perspective of the prime material plane, core - even though it is shifty and elusive) beings, similar to summoned and commanded undead or elementals, but they are of the shadow dimensions.   How the shadow dimensions differ from the ethereal or astral planes is difficult to explain, and the relationship between the shadow dimensions and lower (infernal) planes is equally difficult, even the scholar archivists of Parn Tandalorn find it beyond simple explanation.

It will be recalled that the Cult of the White Shadow adventure takes place with the action mainly in a dungeon.  That dungeon is dug out of the rocky spire at the center of Khomaes, and is accessible through secret means within the estate-villa of Lady Arabelle Siago Rema.  Lady Rema is a lovely, if aging, noble woman that is regarded in the highest of social circles in the high city.  Secretly, however, she is a member of the Cult of the White Shadow, and provides resources, hired thugs, and funds for their operation.  A fact also not known, even among most of the adherents of the Cult, is that Lady Rema suffers from a curious magical affliction, similar in some regards to vampirism.  Rather than feed on human blood, however, she must feed on energies from the shadow dimensions.

Among the few learned individuals who know of her condition, it is suspected that Lady Arabelle Siago Rema contracted her shadow-vampirism through dabbling in magics beyond her understanding, and that she even owns a copy of the cursed book the Earnish-Amantic.  This book is an early text, penned by outcasts from the original Westroner travelers who settled at Dancer's Spike to form Khomaes.  Those outcasts had a curious side religion, following the foul deity Noxecatt.  They came into possession of certain Old One writings, and transcribed some of the spells related to summoning beings related to the Lady of Air.

The Shadow Creatures that are encountered in the Cult of the White Shadow adventure are permanently bound to this dimension, but differ not at all from those that can be summoned.  Following the stats of the creature, two spells from the Earnish-Amantic are presented. 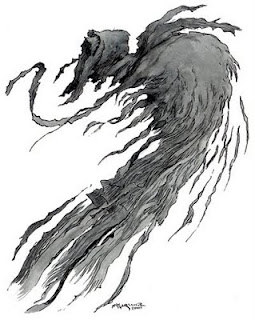 Shadow-Creature
Num Appearing:  As summoned or created.
Alignment: Neutral Evil
Movement:  90' shamble
Armor Class: 6 (see below)
Hit Dice: 3hd (18hp)
Attacks: 2 claws
Damage: 1d6+2/1d6+2
Save: F3
Morale: 10
Treasure: None.
Special:The Shadow-Creature is not all of our plane of existence, part of it is of other planes of existence.  Because of that, it can often slip through the narrowest of openings.  I can easily slide through portcullis bars, or through a slightly ajar door, but it cannot fit between a door and its doorjam - there must be at least an inch or so of clearance (width) to fit through.  The Shadow-Creature is roughly man-sized (5'6" tall), and cannot double over, so the opening must be approximately as tall.
The Shadow-Creature is nearly invisible, bearing only the merest of ripples in our reality.  Means of magical sight can see the creatures just fine, but not infra-vision.  Ultra-vision can see them.  This means a -4 for anyone fighting such a creature.  Seeing the blur means that the foe of the creature has enough knowledge to know where to attack, but the -4 still applies.
The Shadow-Creature, being only semi-solid, takes half damage from non-magical weapons.

From the surviving translations of the Earnish-Amantic the following spells are available.  The book, and the spells themselves, have a curse on them, however.  Learning the Magic User version of the spell (level 4, Summon Shadow Creature) means that the student must make a -2 save vs. Spell.  Success means no ill effect, failure means the student loses 1d3 intellligence, permanently.

Copies of the book are extremely hard to locate, and are in terrible shape (originals are over 1200 years old).  There have been some transcriptions, over the years, so that evil magic user spell books, or the scrolls of EHPs might have a copy of one of these spells included.  The original Old One text (it is presumed by the Archivists at Parn Tandalorn that all of the information within the Earnish-Amantic was originally in the Book of Zargo Zar the Sage) that the Earnish-Amantic was based on are not known to still be in existence.  Quests for that original source are common, but have never proven to be fruitful. 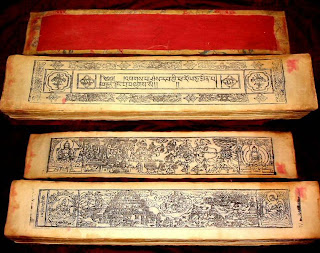 The style of books that was used, before the reforms of the monastic developments of the early Westroner Church, about 1350 years ago,  were pressed together stacks of oblong paper.  These were encased, in a volume, between plates of wood (or sometimes, leather or ivory), and wrapped in tight strips of leather or cloth. Almost all ancient books from this period, that came from Westroners, are of this variety.  Note that the type of writing here is of a script called Abbigave Round, which is of the Abbigave people, far to the West (rumored), that the Westroners came from.  There is an alternative form called Abbigave Tall.  Abbigave Round has some influence on Westschrift

The other spell is for Clerics.  It must be studied by the cleric before it can be prayed for.  It will only be granted to evil clerics.  Each time the spell is requested (i.e. - added to the list of memorized spells for the day), the Cleric must make a regular save vs. magic.  Failure results in the realization that such creatures are destructive to the world, and that it is damned folly to have anything to do with them.  This shock causes 1d12 psychic damage to the Cleric.

Knowledge of this spell, and also of the Earnish-Amantic, as well as other whispered secrets about the Lady of Air, are passed around in certain circles.  This includes those pursuants of power that pay dark homage to Noxecatt and Dralizar, but also others.

Create Shadow Creature (spell)
Level: 5CL
Duration: Permanent
Range: Touch.
This spell, when cast, will transform a recently (not more than 1 day old) dead corpse into a shadow creature.  The being will then serve the simple commands of the creating Cleric until it is destroyed.  The dead corpse is consumed in the process.