Croshan the Tyrant - Wicked leader of "The Society"

In the eastern reaches of the Nightside region, where the murky depths of the Nell Nod forest finally give way to the Khozak plains, there is a region that is controlled by an ogre warlord that terrorizes a wide swath of countryside.  The ogre is named Croshan the Tyrant, and is extraordinary for an ogre in several ways. First, he is intelligent - more so than most of his ilk.  Second, he is a planner and user of resources.  Third, he has a wicked, wicked partner.

In a patch known as the Cowslip Fields, on the northeastern edge of the Nell Nod, there is very large, treeless meadow.  At the center of the meadow, jutting up out of the ground, is a large rock formation, maybe 200 feet across, and approximately 80 feet high at its tallest.  It is all rock, although some small scrubby trees grow in and around it, probably of a similar type (only smaller and sickly looking) to those found in the Nell Nod.  In the base of this rocky formation there is an opening to a large (very large) cave that extends far below the surface.  This cave is the lair of Croshan the Tyrant, and it is referred to (by inhabitants of the region) as the Horrible Cave. 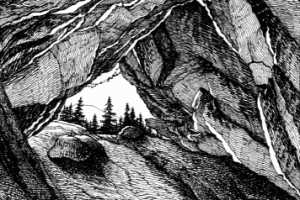 Croshan lives there with a group of humanoids that are loyal to him, that he refers to as "The Society".  At the top of the hierarchy are a group of twelve highly trained bugbear warriors.  These are all recruits/expatriates from the bugbear tribes that dwell within the Nell Nod.  Croshan refers to these 12 bugbears as the "Brothers of the Society".

Croshan's partner (see below) has also gifted him with another group of loyal followers.  There is a flock of approximately two dozen harpies that nest in and around the cave.  These are loyal to Croshan and his partner, but often taunt and molest the bugbears when they can get away with it.  They are the spies and scouts of Croshan, and serve to provide early warning of any attempts to attack the Horrible Cave.  These flying terrors are referred to by Croshan as the "Sisters of the Society". 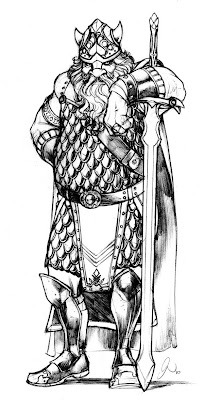 Finally, the loyal members of Croshan's Society includes a group that he refers to as the "Thousand Children of Croshan".  It is not sure how many there are, but the Children of Croshan are Gnolls.  These have been captured, in raids, as children both from the gnoll tribes in the Nell Nod, and also from the Furlingga tribes far to the west, near the Greywater River.  In the second case, there is actually a slave trade that moves along the Great River, with gnoll cubs being captured on the outskirts of the Furlingga territory, and travelled east and sold to the Society, in exchange for the amber mined out the a chamber deep underneath the Horrible Cave.  The chamber is referred to as the Whale's Rest, as it contains (confusingly) the petrified remains of numerous whales, as well as both amber and large deposits of non-petrified ambergris.  These are raised as loyal to Croshan, and organized into "battles" which spend time patrolling the fields in a very large perimeter around the Horrible Cave.

Croshan's enemies include two different subterranean nations that he has encountered deep in the bowels of the earth beneath his cave, and also two different groups of surface dwellers.  The subterraneans that he has great difficulties with include a Morlock colony, and a vast underground city of Duergar.  Occasional treaties exist with both, but warring back and forth is the norm.  Raids against both, by members of the Society, bring up interesting treasures and magic - most of which are claimed by the Brothers, Sisters, or Croshan himself.

The two surface dwelling peoples that Croshan has the most to worry about are the Fethta riding Khozaki nomads, and also the clerics and fighting men that are in service of the Temple of Light, some 100 miles southwest of the Horrible Cave.  The Temple of Light is the original temple built for the Order of St. Kelvin.  The Order of St. Kelvin has two types of clerics, the Light Bringers and the Light Holders.  The traveling, adventuring sort (the Light Bringers) ally themselves with human and elven rangers, and occasionally Paladins of various friendly orders.  In addition, companies of woodsmen (both archers and clubmen) that are loyal to the Order of St. Kelvin will join in on campaigns against the Horrible Cave.

The secret weapon of Croshan, and the thing that has made much of his empire building possible, is his partner (some say illicit lover), the hag-witch known as "The Ghasting Woman".  This creature was once a human spell caster that was transformed into a diabolical Night Hag.  In addition to her abilities as a Night Hag, The Ghasting Woman also has the spell casting abilities of a 6th level magic user, and she retains an intelligence of 17.  She employs a magic ring of Command Human, one of Regeneration and also has a Broom of Flying.  She uses here abilities to try and charm (or kill, if charm is not possible) human commanders.  She has collected quite an assortment, and has them serve Croshan, where their will is slowly broken down, and they are willing to do more and more in service of The Tyrant. Charmed slave warriors make up the front wave of almost any large military operation on the part of The Tyrant.  The Ghasting Woman takes her name from the fact that she actively seeks out and eats human children. 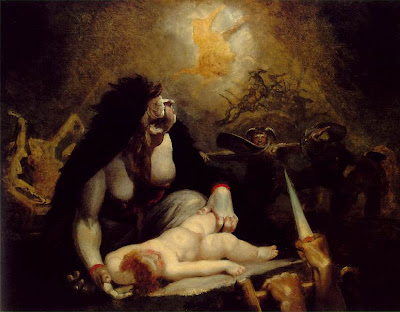 Croshan himself is a remarkable ogre.  He has attained an incredibly high intelligence (19), has seven hit dice, employs a two handed sword (although for him it is one handed), and has a number of interesting magic items.  First, a suit of magical armor that he got once in a bartered trade for a captured Duergar princess.  The armor will magically fit anyone who wears it, and it is treated as chainmail +2.  The next item that Croshan employs is a magical two handed sword, which he employs one handed.  It is a +2 two handed sword, that once belonged to a family of warriors from Ungams.  The sword was called ":Paragon" and in the hands of a lawful or neutral good wielder provides a 10' radius of Protection from Evil.  Finallly, the last item in the hands of Croshan is a very large shield of magic resistance.  It grants Croshan with a +2 to all saving throws vs. magic spells or spell like effects, and also grants him a 20% chance of magic resistance.  In the hands of Croshan (or another evil being), the sword wails and cries in horrible agony whenever he wields it.  This has the effect of rendering all foes within 20' of Croshan of having -2 to hit, and -2 to saving throws.