In the Nightside region of the Valley, where the Tiazarr river bows out to the east, almost reaching the Nell Nod forest, there is a very curious relationship among two animals that has developed.

The first is the Jesting Bird.  These are very large, but slim, flighless birds.  They can reach 10 or 12 feet in 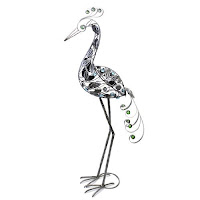 height, and are very slender.  They spend their days, mostly, among the slender greywillow trees that grow in small clumps in the riparian earth on the eastern banks of the Tiazarr.  The Jesting Bird has long grayish legs, and a long grayish beak, and would blend in with the tall, smooth trunks of the greywillows, except for the very light colored plumage of the birds.  They vary in color, between white and very pale blue.  During cooler months, this will darken, the white becoming itself a dark gray (much darker than the bare gray branches of the greywillows), and the blue species becoming a dark blue.  This dark color only lasts for a few months, and when warm weather returns, the darker plumes are shed, and lighter ones replace them.  During this process, a light, airy fluff forms on the tails of the males, and it is used to attract the females.  The Jesting Birds are usually quite amiable, and will not be scared off too easily.  They will approach people and riding animals, and they make a strange koo-klucking noise while tilting their heads from side to side.  With their great height, they can look down on a person riding a horse quite easily.  Encountered in the environment they love so much between the banks of the Tiazarr and the Nell Nod, they are often in family groups of 2-12 adult birds, and depending on the time of year, could have half again as many chicks, ranging from two to six feet in height.

With the long thin beaks that they have, it would be natural to think that the Jesting Bird gets meals from the banks of the river - either burrowing creatures, or fish.  This is not true, but to see what the Jesting Bird eats, taking a look at the other animal that partners with it is a necessity.

In the same region of the Valley, there exists a small winged mammal.  It is very similar to a bat, and is 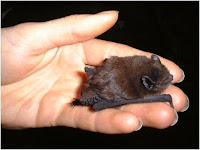 sometimes called the Fool's Bat.  The Archivists at Parn Tandalorn, certain rangers and druids, and other sages will refer to it, however, as the Cenotaph Bat.  These creatures are quite small, smaller than a human hand, even with their wings extended. And they fly almost silently, lacking the flap-flapping common to bats.  What makes them so dangerous is that they have a curious magical effect to their bite (it doesn't seem to be a physical poison, just some magical effect of the creature itself).  This effect will render the victim quite immobile for 1-4 turns (each turn, remember, being 10 minutes).  A saving throw vs. paralysis is allowed, but with a -2 - the effect is quite strong.  The Bats seem to feed off of the warmth and life force of warm blooded creatures, so once they paralyze a victim, a dozen or so bats will come and roost on the body.

Now, what makes the Cenotaph Bat so dangerous in concert with the Jesting Bird, is that the Bats tend to roost in the same Greywillows that the Birds often nest and graze near.  And when a victim comes near by (any mammal, human, demi-human, or humanoid will do), it is often set on by a half dozen or so (1d6 +2) of the Bats.  Once the Bats have had paralyzed the victim, and the body fills up with a dozen or so bats, then the Jesting Birds will come in.  The Jesting Birds, you see, are blood drinkers.  They will use their long beaks to pierce the paralyzed bodies, and begin draining blood.  Once they make a successful hit against the armor class of the paralyzed victim, they begin draining blood at the rate of 1 point of constitution per round.  Given the large size of the Birds, they can only manage to get 2 or 3 birds - at most - feeding off of a man-sized body at one time.  The worst aspect of this habit of the Jesting Bird, is that the victim, although paralyzed, is quite conscious and aware of what is happening during the entire ordeal...

The reason for the name of the Jesting Birds is that once they have drained a victim of all of its blood, then they will do a little strutting dance around the body, and sing a different song.  Rather than the usual "koo-kluck! koo-kluck!" that they do when just roosting or waiting for a meal, once they have fed then they will sing a song that goes "koo-Ha! koo-Ha! koo-Ha! Ha! Ha!".  It sounds, disconcertingly like laughter.

Name: Jesting Bird
No. Encountered: 2-12
Alignment: Neutral
Movement: 80'
Armor Class: 4
Hit Dice: 3
Attacks: 1 Kick, 1 Beak Stab (self defense)
Damage: 1-6 (kick); 1-4 (stab)
Save: F3
Morale: 9
Hoard Class:VI (remains on dead victims)
XP: 75
If the Jesting Bird successfully scores with a Beak Stab, then next round it will begin draining Constitution from the victim, 1 point at a time.  It takes 1 full week to recover a point of Constitution lost in this way, although a Cure Light Wounds will restore 1 point, and a Cure Serious Wounds will restore 1d6 points.


The Cenotaph Bats, on the other hand, are completely silent, all the time.  Especially when flying or hunting, however.