Tears of Heaven - Enchanted lakes in the Destriel Mountains

Far in the northeast part of the Valley, in the Destriel Mountains, there exist a series of interconnected lakes, known as the Tears of Heaven.

The name, and source, of these lakes remains quite mysterious.  At the center of each lake, there is a spout of water, pouring down out of the heavens, that fills the lakes.  Because of this pouring and the splashing and diffusion of the water vapor, the whole region is constantly in dense fog.  The countryside immediately surrounding the lakes is also home to immense plant growth, and very thick forests consisting of the very tall, Cloudhome Trees, exist in a thin wall around each lake.  These dense forested areas are only half a mile thick, at most points, around the Tears. 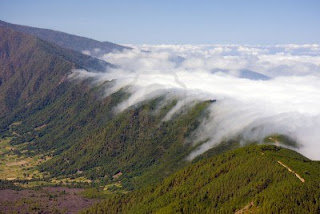 The region around the Tears is giant country.  This includes the peaks and slopes of the Destriel Mountains, and all along the valley floors where the Tears themselves are located.  There are several species of Giant to be found here, and even among the same species (for instance, Hill Giants), there are competing groups under different leaders, who constantly make war on each other, as well as making the immediate area quite dangerous for travelers and adventurers, who might be seeking the secret of the Tears of Heaven, or one of the many Old One sites in the surrounding mountains.
Email ThisBlogThis!Share to TwitterShare to FacebookShare to Pinterest
Labels: April2013, Destriel Mountains, Tears of Heaven