Xander One Eye - Captain of a band of Rogues and Bugbears

Xander One-Eye is the name of a leader of a band of marauders from out of the eastern reaches of the Tiazarr Forest, near the Tiazarr River, in the Wychwood Region.  These Marauders take advantage of the fact that much of the City of Ten Gates (capitol of Gorrem) does not hold much military power this far east, and the reputation of the Forests in the Wychwood Region keeps the Sun King Barbarians far south of here. 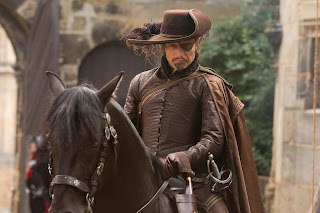 Xander takes his name from the fact that when he was a younger man, he took up the career of "Highwayman", and would regularly hold up carriages and travellers along the road from the City of the Ten Gates, down southeast, towards the City of Fire (capitol of the Barony of Lynch).  While a wagon train bearing some of the Baroness' Best beer out of Gorem was traveling the road between the Plum Woods and the Belley Woods, the train made its way through the Greenapple Commonwealth.  While stopped at one of the small towns there, to trade some of the award winning beer to the Halflings that live there, Xander stowed away on one of the wagons.  As the wagon was leaving town, he climbed out and told the driver to "Stand and Deliver".  Well, the driver was none other than a pair of Halfling drovers, from the Commonwealth, and the watchman had been peeling some apples with a small paring knife, and sharing them with the wagon driver.  Well, Halflings being deadly accurate with thrown weapons, it wasn't long before the startled fellow flung his knife, and Xander lost his eye.  He continually tells the story to keep up both his reputation as a brigand with a sense of humor, and also as a self reminder towards humility, and not to take ANYONE as not being a threat.

These days, Xander as a 9th level thief, has built himself a nice stronghold in the dark confines of the Tiazarr woods amongst the Wychwood trees (for which the region takes its name), and has attracted quite a following.  The main part of his gang, are some 30-40 human brigands (about half of them fighters, and half of them thieves).  Along with that, however, he has impressed a band of Bugbears into joining in his gang.  These shelter separately from the human Brigands, and answer to a Bugbear chieftain named Arpus Ard, who counts himself as one of Xander's lieutenants.  Arpus Ard has mustered a few dozen Bugbears to join the gang of Xander.
Here is a map of the region, showing the many forested areas of Wychwood, between Gorrem (and the City of Ten Gates) and the Tiazarr River.