Arrando Hill is the site of an ancient stone circle (Lerrandish), thought to have been constructed by the Old Ones. It is the summer home of a group of wandering Striped Ones (five foot tall Raccoon People, one of the Forest Folk). They camp here, in a variety of tents and wagons (pulled by oxen, no horses), and gather pollen-honey from the surrounding fields full of giant bees, all summer, leading up to a festival bringing on the advent of Autumn - at which point they travel south, "chasing the summer" as they put it. 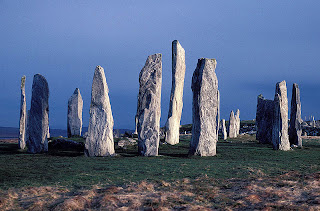 Arrando Hill is in the Bartaloo Region of the valley, which is located south of the Great River, and between the Pellet Water Run, and the Two-Moon River.  The Hill itself is located at the northwestern edge of the Falcon Woods, in a plain where the hill stands alone.  The edge of the Snake Grove section of the Falcon Woods lies approximately 10 miles southeast of the Hill.  There are no habitations nearby, but the local Putarra-Gnome clans (and their herds of talking Axebeaks) avoid the hill and its surrounding plain, as if it were haunted.  Their name for the opening is the Cursed Plain.  Several rumors and legends about the area include the idea that ghost herds of the long gone horses of Bartaloo haunt the Cursed Plain.

The Striped Ones, of course, are not interested in the Putarra-Gnomes, and pay no attention to their myths and dire warnings about herds of ghost horses and haunted hills.

The Putarra-Gnomes are Mika-Born, and speak a heavily accented Kurakka Kurad as well as Westron.  Otherwise their resemblance to other Gnomes is only in shape and size.  They are dark skinned, typically, live in small clan villages in the open lands of Bartaloo (both north and west of the Falcon Woods, as well as south of the woods).  The Putarra clans have semi-domesticated a curious breed of Axebeaks that roam the open lands of Bartaloo.  These are somewhat more intelligent than typical Axebeaks, having the ability to speak.  They also have developed a strange resistance to magic (+3 to saves vs. spells, wands, rods, staves - immune to sleep and charm spells), and can share a telepathic link with their bonded Putarra-Gnome rider.

Friction arises every year between the Striped Ones and the Putarra-Gnomes.  Sometimes it devolves into open combat between the two groups, but usually it can be settled with single combat (to the blood, not to the death), or by the payment of were-geld.

The hill itself has a sequence of hidden chambers and dungeon layers beneath it, but they only open at certain times of the year (revealed by a magic flute, called the Song of Lerrandish, made out of the same strange stone material the standing stones of the circle are made out of).
Email ThisBlogThis!Share to TwitterShare to FacebookShare to Pinterest
Labels: April2013, Bartaloo, Falcon Woods, Forest Folk, Pellet Water Run, Putarra, Striped Ones, Two-Moon River