Lands to the East - Ying, land of Sorcerers

Ying is the name often referring to area to the east of the Valley.  It is actually a vast ocean, that the Great River flows into, covered in Island Chains.

Precisely, Ying is the name of a seaborne empire that exists, ruling from the island Kelewan.  It is the Ancient Imperial House of Ying.  The empire is ruled by a succession of Sorcerers, descending from the original (Ying I) who subjugated a powerful fire elemental and stole his powers, many centuries ago.  The ancient Ying Empire was a contemporary of the Old Ones in the valley.  The grip of the empire over the subjected peoples is extremely tight, and with their ancient magic and their naval forces, this is easy to maintain.  Most of the peoples and nations that have been subjected and made part of the empire come from small island nations, and don't have the resources to stand up against a mighty empire.

One of the things that makes the Ying empire so strong, is of course, the strength of her navy.  The great ships of the Ying navy are constructed from the remains of the massive dragon turtles (larger than typical sized dragon turtles - much larger), using the shell for the hull.  Combined with magical construction techniques (like the forming of the shells through spellwork, and the imbuing of it with magical metals for strength), this makes for extremely tough, and excellently built, hulls.  Some of the ships, of course, last for centuries and centuries.  The oldest are from more than a thousand years ago.  Over time, the sorcerers that work with the vessels find it convenient to bind spirits and elemental beings to the hulls, so that they each eventually take on a personality and become alive. 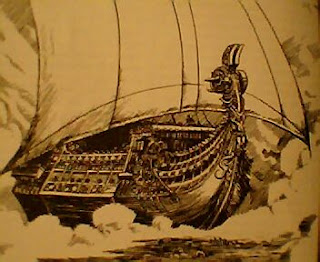 The society and culture of the Ying empire is such that they are extremely scared of, and shun anything to do with the gods.  Their fear of the elemental gods was what kept them separate from the Old Ones, and their fear of the Three Goddesses, and their whole pantheon of demigods and saints, is what keeps them out of the Valley, and away from the culture of the Westron Baronies.  Still, there will occasionally be one of the massive Dragon-Turtle Ships from the Ying Empire that travels  westward on the Great River, sometimes reaching as far as Suuviz or the Shale March.
Email ThisBlogThis!Share to TwitterShare to FacebookShare to Pinterest
Labels: April2013, Valley of the Old Ones, Ying