This adventure location was originally part of the writeup on Icewall, the Riverjarl Steading.  This location is near the Greywater River, in the Darkearth Plains.  It is located on the River Jarl map.  It is adventure 1 in the Week of Adventure Locations.

Adventure Location: Several days journey, but not a journey to be undertaken by those unfamiliar with the Ice Father, across the glacial ice - there lies a series of small villages of ice people. They live in curious round houses, made of ice and snow, and live by hunting ice worms and sometimes ride ice spiders in great hunts for the white frost-yaks that live on the glacier. 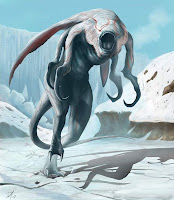 Among these ice people is said to be knowledge of a hollowed out rift in the glacier, where the mouth of an ancient castle, long buried by the ice.  This castle, which lies mostly underground (and almost all under ice) was perhaps built by the Old Ones.  Regardless, today the ice people believe it is home to the feared four armed glacial beast.  The glacial beast is a very large (12' tall) clawed creature that lives on man flesh.  The glacial beast is rumored to be able to run silently, among the swirling blind driving snow of the northern blizzards, and attacks caravans of travelers who are foolish enough to be out on the ice during such storms.  Among the ice people, there is  a tradition of hunting the glacial beast as a mark of entry into adulthood.  Both male and female members of the ice people tribe take part in this hunt, and it involves small teams of the tribe members who are coming of age each winter to go out among the fiercest of storms, carrying only spears tipped with narwhal horns, and riding the ice spiders that they are fond of .  Occasionally, a small band of these villagers attempting to prove that they are worthy hunters will return with the severed claws of a glacial beast.  Equally likely, however, are the years when none return.


Other than being the home of the glacial beast, however, the icy covered black stone castle entrance is likely to be the portal to one of the most mysterious locations in the north - the fabled dungeons of Igo Umblar.  Igo Umblar is legendarily known among the archivists as the astral navigator who eventually led some of the Old Ones to leave after the ancient troubles with the members of the Seely Court.  His underground domain would certainly be a dungeon worth exploring, and should be home to all sorts of enigmatic treasures, as well as fearsome creatures left over from the reign of the Old Ones. [This is location 1 in the Week of Adventure Locations]
Email ThisBlogThis!Share to TwitterShare to FacebookShare to Pinterest
Labels: adventure, Darkearth Plains, Greywater River, Igo Umblar, River Jarls