Knights of Torisch - Knights of the Barony of Hogle


The Knights of Torisch are an order of knights that are headquartered in the First City, of the Barony of Hogle, in the 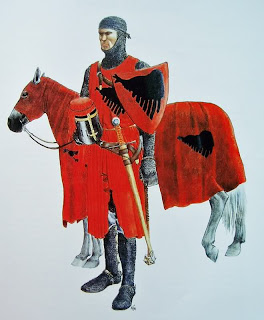 They are allied with the Aublan Cat Riders.

Torisch of Ockett was the first Prince of the Granite Hold - the castle built by his Father (Sir Tuneyer of Ockett), the origin of the city and Barony of Hogle.  The name of the Barony comes from the name of Sir Tuneyer's family (technically, without his title from the Westron Lands, he would be Tuneyer Hogle; but he was also the lord of the Ockett Fiefdom, that he left when coming to settle the Valley).

Both Sir Tuneyer and  his son Torisch were of the Lass Indol people, and as such,they venerated the four goddesses of those people. In the early days of the migrate, before the understanding of the relationship of the Three Goddesses to the Valley, and the structure of the Church of the Three Goddesses become much more formalized, there were many who were worshippers of the Lass Indol goddesses.  Torisch himself was partial to Neuvirra Oss, the goddess of Spring and Planting.

When the extensive presence of evil creatures (as well as diabolical forces and curious sorcerous monsters left behind by the departed Old Ones) became known, it was decided that an order of questing knights would be formed in order to proactively find evil and vanquish it, before it became a threat to the new Barony and its land and holdings.  The young prince, strong of arms and admired by the fighting men of Sir Tuneyer, would be at the head of the order.

There were no orders of Paladins at the time, so the idea of holy knights of Neuvirra Oss was not in mind when Sir Torisch formed the order, but instead they became a large company of knights, having forsworn personal property, and loyalty to Sir Torisch instead.

The order exists to today, as an example of a non-church aligned order of knights that fighting men of the valley can be associated with.

From the earliest days of the order, however, they had a very important ally.  That was the friendship between the Knights and the Aublan Cat Riders.  These were a barbaric people, by Westron standards.  A group of nomadic clans, that did not build cities or permanent holdings, did not work metal, and did not have learning (either religious or magical).  They did, and still do, have a singular relationship with the great plains cats of the region.  These plains cats are similar to the great saber cats that sometimes roam down out of the Destriel Mountains (especially in the Darkearth Plains region, but really all across the north).  The plains cats, however, instead of the only the tawny color of the Saber cats, are sometimes orange or white and sometimes striped somewhat like a great tiger.  With their friendship with the Westroners, and especially the Knights of Torisch, the Cat Riders now had metal weapons and armor made available to them.  Gifts of this sort where enough to bond a Cat Rider for life.

The Cat Riders were a great ally to the Knights, and participated in a lot of quests and adventures with them. One of the main foes for both forces, however, are the cannibal-cultists of the vampire lands that emerge from the Caves at Groben.

The vampire lands are the name of an underground realm, peopled by cannibalistic human barbarians, and held in sway to a trio of vicious devils.  These poor souls are often thrust into the wars between the Gray Dwarf kingdom of Deep Delving and the vast Black Goblin Empire.  When pressures mount too high, migrating bands of the human cultists and barbarians will emerge, and have to be dealt with by the Knights and their Cat Rider allies.

In addition, the primitive men, the Oordut, who live in and around the icy upper levels of the Groben Caves, sometimes will frenzy (the shamen-chiefs of the Oordut are typically peaceful, but occasionally, for some inscrutable reason, they will begin attacking the more civilized lands around their own icy reaches), and this demands the attention of the Knights and the Cat Riders.  The very small Keepi-keepi people who dwell among the rocks scattered throughout the region are thought to be similar to the Oordut - except that they (the Keepi-keepi) are so much smaller. 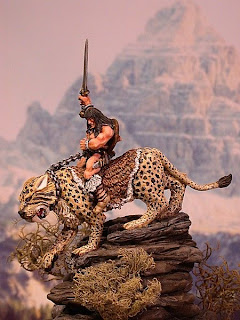 a permanent holding.  Usually the clans are divided up into two "nations" - the Northern Hunt, in the plains north of the King's Highway, and the Southern Pack, from the plains south of the King's Highway.  The whole region is referred to as the Aublan Valley.  Each summer, for a week before, and a week after the summer solstice, representative warriors from all the clans will gather at a particular spot of the King's Highway, on both sides of the mighty mound.  At the top of the mound, along the Highway, at this point, there is an ancient structure of the Old Ones.  It is a very tall alabaster tower, with a ringed round wall around it.  Written on the wall, in several locations, is the word Aublan. It stands in the middle of the mound of the King's Highway, dead center in the highway itself, with the road passing on either side.  There is neither gate nor door through the ringed wall, but inside there is an opening into the tower.  It is said to be the home to a curious race of dormant gargoyles, yet the rite of passage of a young member of the Cat Rider clans who want to become a clan chieftain, or a Khan of either the Northern Hunt or the Southern Pack, is that they must climb to the top of the tower of Aublan, awaken one of the alabaster gargoyles, and do battle with it.  It is not known what other secrets the tower of Aublan holds, but it might be worth exploring, by the brave and prepared.  But not when the massed clans of the Cat Riders have gathered for their summer ritual.
Email ThisBlogThis!Share to TwitterShare to FacebookShare to Pinterest
Labels: April2013, Aublan, Groben, Hogle, Knights of Torisch, Lass Indol, Shattered Plains