St. Jaspar is a member of the constellation of minor dieties and apotheosized saints that make up the Nadene branch of the Church of Three Goddesses.  In this case, St. Jaspar is the patron saint of Strength and Rocks.

St Jaspar began life as Jaspar Wilderman.  He was a fighter in the service of the Archduke of Scallen, back in the early 280s, when Scallen was the capitol of the Kingdom of Ymnaris.  Jaspar was a captain of a company (100 men) of halberdiers, serving by patrolling the Pellet Water river, and also the Falcon Woods.

While on patrol, he once encountered a strange scene, while separated from his men.  He was traveling with half of the company of halberdiers, tracking a raiding party of Bugbears out of the Falcon Woods, and was separated from his men early one morning.  While he waited for the half company to reform, he was searching an area around a gorge of water.  The water was welling up out of the ground, and filled a small natural rocky basin, before running of in the light woods as a tiny stream.  He came across a young goatherd girl, sitting by the gorge, and tending to a mother goat and her young.  The young girl looked up to see Jaspar coming across the clearing towards the gorge, when a band of Bugbears, led by a berserking Minotaur, came out of the woods and charged the young girl.  Jaspar sprang into action, but only had his hunting knife and a short sword with him.  He immediately charged the Minotaur and grappled with it, stabbing again and again.  The Bugbears were amazed, and stood down to watch the fight, and see how their monstrous leader would fare against this brave soldier.  The girl gathered up the goat yearlings, and retreated to the base of a big tree, just outside the clearing of the gorge.  Finally, Jaspar succeeded in killing the Minotaur, and the band of Bugbears would have charged the fatigued hero, except at that point, a patrol of the halberdiers arrived on the spot, and gave good sport to the Bugbears.  They were soon killed or routed, and the soldiers in hot pursuit.  Jaspar bound a gash on his arm as best he could, and then immediately looked after the girl, to see if she were okay.

That was when the girl revealed herself as the goddess Nadene, the goddess of fertility.  She thanked Jaspar for his bravery, and immediately gifted him with immortality, and great strength, and told him that the stones where he stood would be the basis for his power.  And so, Jaspar Wildeman became St. Jaspar, patron saint of strength and rocks and the earth.

Over time, the great strength of St. Jaspar began to reveal itself, in lots of fantastic feat.  Also, the sages and mystics of the age realized that had become something more than human through his encounter with Nadene.  There were those who began to pay homage, and to worship the relationship between the saint and the goddess. Over time, this grew into the young version of the Order of St. Jaspar.  A home for the order was needed, and the fantastic stone formation at the heart of the City of Shadows, the capitol of the newly formed Barony of Henn, was chosen as the site for this. Work began, on the Cathedral at Earthroot, and it grew over the centuries.  All of it is constructed of stone, and much of it is carved directly out of the great formation itself.  Much of the traditional ritual within the Order of St. Jaspar involves self meditation, and the only communal acts are the playing of slow reflective music, on stone instruments (flutes, mostly, but also a strange sort of xylophone type instrument), and the recitation of ethical oaths of behavior.  Because of the solitary nature of the order, much of the cathedral is given over to individual cells, and small meditation rooms. Much of the meditation has to do with the Way of Stone, which involves the great mystery, of how is stone alive?

The order attracts those from all walks of life, but it has a special appeal for those who make their labor in life through working the earth, especially in trades that require great amounts of physical strength.  This includes masons, stone carvers, miners and even some farmers.  Because of the background of Jaspar Wilderman, and his simple story of courage being rewarded, the order also appeals to warriors and soldiers in no small numbers.  There are even a number of Dwarves and Gnomes in the mix, from those communities where they have taken to following the Church of the Three Goddesses.

The clergy of the order includes both men and women, although men predominate.  Both are viewed as equal, however.  Strength and acts of strength are seen as gifts from St. Jaspar, and the path from novitiate to full priest is full of different stages of exhibiting personal strength - usually physical strength, but also strength of mind and strength of character.  Outside the single largest concentration of the Cathedral at Earthroot, there are a number of churches and community halls dedicated to St. Jaspar.  There are also a large number of hermitages and abbeys.  Living in community, isolated from the world, is very appealing to the men and women who are attracted to the Order.  Typically, clergy wear white robes, trimmed in geometric shapes of some color or other, reflecting the church or community they are associated with. 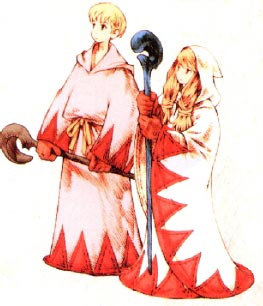 A school of clerics, who are not only encouraged to move out among the peoples of the valley, but who also regularly take up arms against evil and injustice, exists.  It is from this school, the way of the wandering stone, that the Brothers and Sisters of the Wandering Stone come from, and also where most clerics (in the sense of the adventuring class) will come from.  The monastic branches of the order will refer to these as the Rolling Stones, and these wanderers (who also, in their way, dedicate their life to understanding the mysterious Way of Stone, but through the application of force to right wrong and thwart injustice) will refer to their monastic brothers and sisters as Mossbacks.